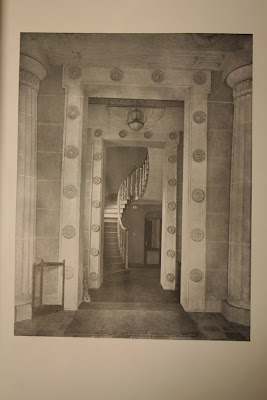 I have just had a fascinating discussion with Paul Croft about a Charles Reilly building we are working on in Liverpool. He believes that Reilly may have been trying to re-create an interior with the character of Greek temples, by painting the plasterwork to imitate Pentelic marble. This would have been in 1910-13, just after N. Balanos carried out his restoration of the Erechtheion (1902-09), so is extremely plausible. I have not yet found any evidence of any visits that Reilly made to Athens, but he was well travelled in Europe. We will just have to see the outcome of architectural paint analysis and trial panels to see the original finishes. Interestingly, it may have been a very deliberate choice to contrast with St. Georges Hall, in all its polychromatic glory, which Reilly admired.


I had not come across the name Pentelic marble and my last visit to the Acropolis was in about 1982, when it was very hot and the monuments were inaccessible. I have now looked at the website www.ysma.gr/en and what a fascinating site that is, telling us in great detail about the recent restoration of the Acropolis. They say that they are matching the original Pentelic marble but the colour is so different in the photographs (the original marble a kind of pale creamy pink and the recently quarried stone a pale creamy white), that I wonder what has caused the change in colour?  How long will it take for the new stone to weather and to blend more uniformly with the old, or is it better that the old and new have a strong visual distinction, given the complex history of the various restoration schemes? Is the difference iron oxide staining from the iron used in the original construction or is it the effects of centuries of pollution? Or is the source a different seam from the quarry on Mount Pentelikos? The "ysma" site states that the effects of "microbial colonies, consisted of bacteria, algae, fungi and lichens" have altered the colour of the surface of the monuments, but no more.

Until I started looking at the links I wasn't aware that the Elgin Marbles had been cleaned a number of times, whilst in the British Museum, in an attempt to return their white colour, most recently in the 1930s. This was based on a misunderstanding that their original colour was white. Now that's another story!.............The British Museum accepts this was "a mistake" and deals with this in a paper on their website by Ian Jenkins.
Posted by Mel at 07:28