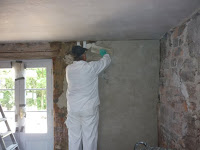 I am monitoring progress on our new hemp lime plaster walls in the "extension" this week. The old walls had been mistreated and sealed with almost neat cement render in places. They were re-plastered by Andy Lawson of Limecraft in the Spring of 2011 dubbing out with hemp & lime supplied by Womersley's and then plastering in several coats up to 50mm thick. The basecoat was finished with Special Fine Finish lime plaster supplied by Rose of Jericho.

In hindsight it would have been better to use an intermediate coat with a finer grade of hemp or haired lime, as the walls are very uneven, but it certainly has "character". The walls have taken a long time to dry out compared with haired plaster (over 9 months) and this has been variable even though the substrate was prepared in the same way. Some damp patches were evident about a metre above the floor level, unrelated to rising damp. The central heating has now drawn the damp through the wall internally with resulting patches of efflorescence on the surface of the painted plaster.

This week, following Nichola Ashurst's recommended treatment for efflorescence when damp walls are drying out, I have dry vaccumed the patches of efflorescence and have re-painted the walls with casein distemper supplied by Rose of Jericho. At the moment it looks fine and the visible damp has gone. It's going to be interesting to see if we get the damp returning when the heating goes off in the spring, especially if there is a temperature inversion and the building "sweats". Lime is so forgiving - I love it. The spare tub of lime finishing plaster can be used indefinitely for patch repairs when the children whack the walls!
Posted by Mel at 09:42 3 comments:

Recently carried out research for a listed building in Chester. It was one of those rare lucky strikes where there was a huge amount of material scattered all over the country, in London, Bolton, Swindon and Chester. Visited Bolton Archives where there were over 50 drawings - a gold mine, with survey drawings of the building from the 1920s, proving that it was hugely altered at that time.

This demonstrates the value of thorough informed research and the usefulness of the National Archives database, which provided information about this source.

This now throws a questionmark over the authenticity of the Georgian interiors. Architectural paint analysis may be the only answer.

The Pevsner volume on Cheshire also incorrectly attributes the work carried out in the 1920s as by Sir Charles Reilly but although he may have influenced the arcaded hallway and the plasterwork in the Dining Room, most of the alterations were by a little known provincial architect from Bolton called, Richard Hermon Crook.
Posted by Mel at 08:34